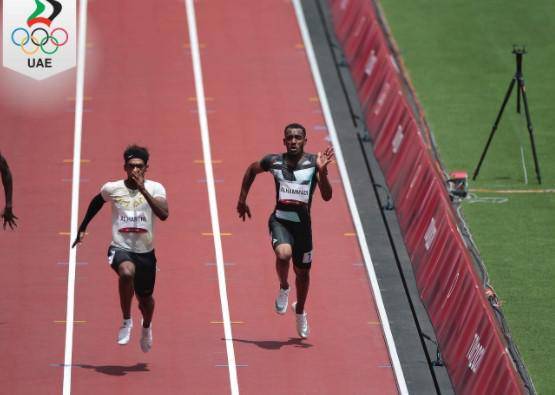 Al Noubi, who has won the 100-metre and 200-metre races at the national level, will feature in the next round of the 100m event

UAE sprinter Mohammed Hassan Al Noubi qualified for the next round in the 100-metre event at the Tokyo Olympics on Saturday.

Al Noubi qualified for the next stage with a third-place finish in the 100 metre heats preliminary round. The UAE athlete clocked 10.59 to take the third place behind Barakat Al Harthi (10.27) of Oman and Emanuel Archibald (10.30) of Guyana.

Earlier, Al Noubi said that taking part in an Olympic Games is the dream of any athlete that aspires to represent the country at the highest level.

“I extend my thanks and appreciation to the National Olympic Committee, UAE Athletics Federation, Sharjah Sports Council and all those who supported me in my path to reach this Olympic stage,” Al Noubi said on Friday.

“I will give my all tomorrow for my country and its name. As an international athlete, I have the responsibility to represent my country in the best possible way.”

Al Noubi prepared for the Tokyo Games at a training camp in Bulgaria.

He said the training camp in Bulgaria helped him to be in top condition for the biggest event of his life.

“My presence in the Olympic Games is a great opportunity to participate in front of the world champions and Olympic champions,” he said.

“I can benefit a lot from their level and performance. Just by watching them, you can learn so much. I hope to gain invaluable experience from Tokyo and use that to win medals for UAE in future events.”

On Thursday, UAE judoka Ivan Remarenco crashed out of the Tokyo Olympics with a defeat to Shady El Nahas of Canada in the round of 32 clash.

Remarenco, an accomplished performer on the international stage, failed to find his top form against El Nahas’ on Thursday, losing the clash by a 10-0 margin.

The 32-year-old judoka, a bronze medallist at the 2014 World Judo Championships, had suffered a shoulder injury last year.