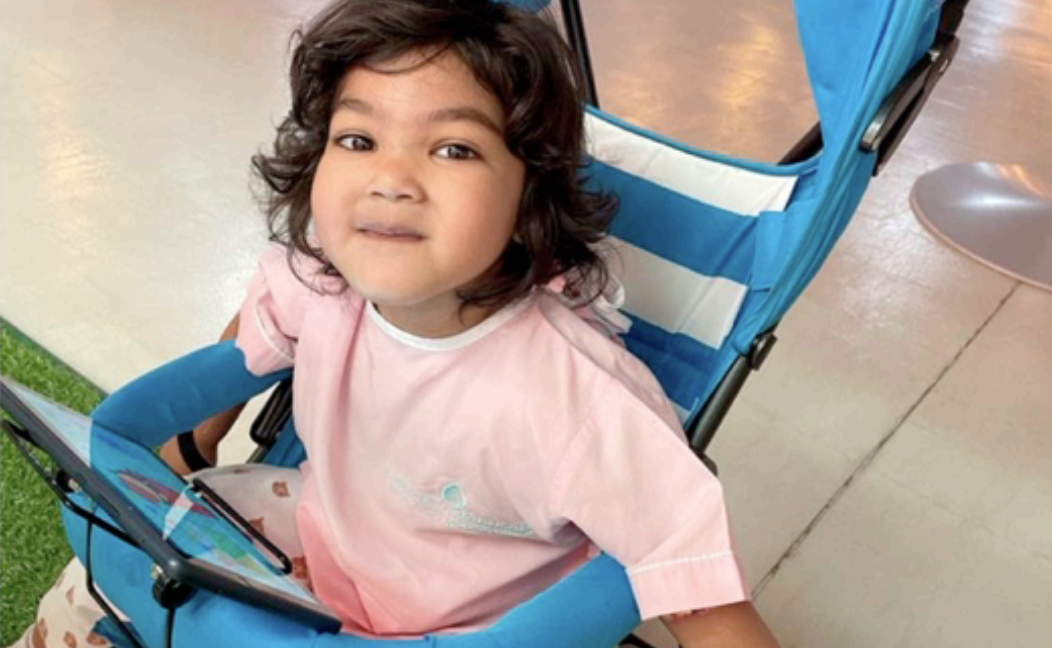 While four-year-old Angelica Fernandes may look like a normal fun-loving child, the scars all over her body will tell a different story.

For the last six months, Angelica has undergone several painful and unpleasant surgeries for survival. And yet, the doctors have given her just about a year to live unless she gets a heart transplant.

Angelica is suffering from a rare and critical cardiac condition named restrictive cardiomyopathy, where her heart muscles have gone weak and it is unable to pump out blood normally. The result of this is blood accumulation around the heart and liver area, leading to the enlargement of both the organs.

Her mother Sherry Fernandes said the ordeal began in February when she noticed that her child’s stomach started looking abnormally big. When she discussed this with her relatives, they dismissed it as something trivial, saying that “at this age, the child is growing up, hence, stomach also looks a bit big’. Some even blamed her for of making the child wear her pants too low.

Over a period of time, Sherry (Angelica’s mother) noticed that her daughter’s belly button began protruding in an abnormal way and went to a nearby clinic that suggested they get an ultrasound done. The ultrasound scans showed that Angelica’s heart had enlarged as it was surrounded by a lot of liquid.

“We were directed to Al Jalila Hospital where we were told that she is suffering from a rare cardiac condition named restrictive cardiomyopathy, in which chambers of the heart become stiff over time, making it harder for the heart to pump blood to all the body parts. The blood then backs up in the circulatory system. This can cause fluid to build up in the body,” said Angelica’s father Dennis, who works as an administrative officer in Dubai.

Although the only way to save Angelica’s life is getting a heart transplant, which will cost around $150,000, the first thing the doctors had to do was to drain out the liquid from around her heart.

“Doctors used catheterisation to remove the liquid around the heart area. They also were giving her oral medication to drain out excess liquid that had accumulated in the stomach. The doctors also conducted an open-heart surgery on the four-year-old to do another heart procedure to see if that helps. But nothing worked and the parents were directed to take the child to India (as it is the closest) to get her a heart transplant,” added Dennis.

“No child should go through what my child has to go through,” said her mother Sherry, who says not a single day has passed in the last couple of months when she hasn’t cried seeing her child go through painful medications and surgeries.

From the chest to the thigh (from where doctors put stent), to her neck (from where biopsy was conducted), little Angelica’s body is covered with cuts. Apart from a number of medications that the child has to take every day, she also has to be given morning and evening injections.

“My daughter used to love going out but now she is so scared of it as she thinks we will take her to a hospital for tests or treatment,” said Sherry.

Apart from worrying about the funding of the operation, the Pakistani expatriates were told that since there are no child heart surgery specialists or hospital in the UAE, they would have to fly to India in order to get the complex and urgent heart transplant surgery done.

“Since the expertise needed to conduct this complex and urgent surgery is not available locally, our family has been referred to Apollo Hospital in India. The initial cost of the entire treatment is $150,000. If the essential treatment is not facilitated, Angelica barely has any chance of survival with an estimated life span of only one year as per the doctors who diagnosed her condition,” Dennis said.

The Indian consulate is also supporting the couple and is facilitating the visa process so there is no delay in treatment.

“Our savings are depleted and our family’s monthly income is mostly spent for my daughter’s medication. Moreover, my wife will soon need to step down from her career in order to look after our daughter. We are both mentally and financially drained out and are in dire need of sponsorship from kind-hearted donors to support the treatment.

The Fernandes family is in touch with St Mary’s Catholic Church in Oud Maitha, that is helping facilitate the essential coordination with medical experts pertaining to the treatment of Angelica.