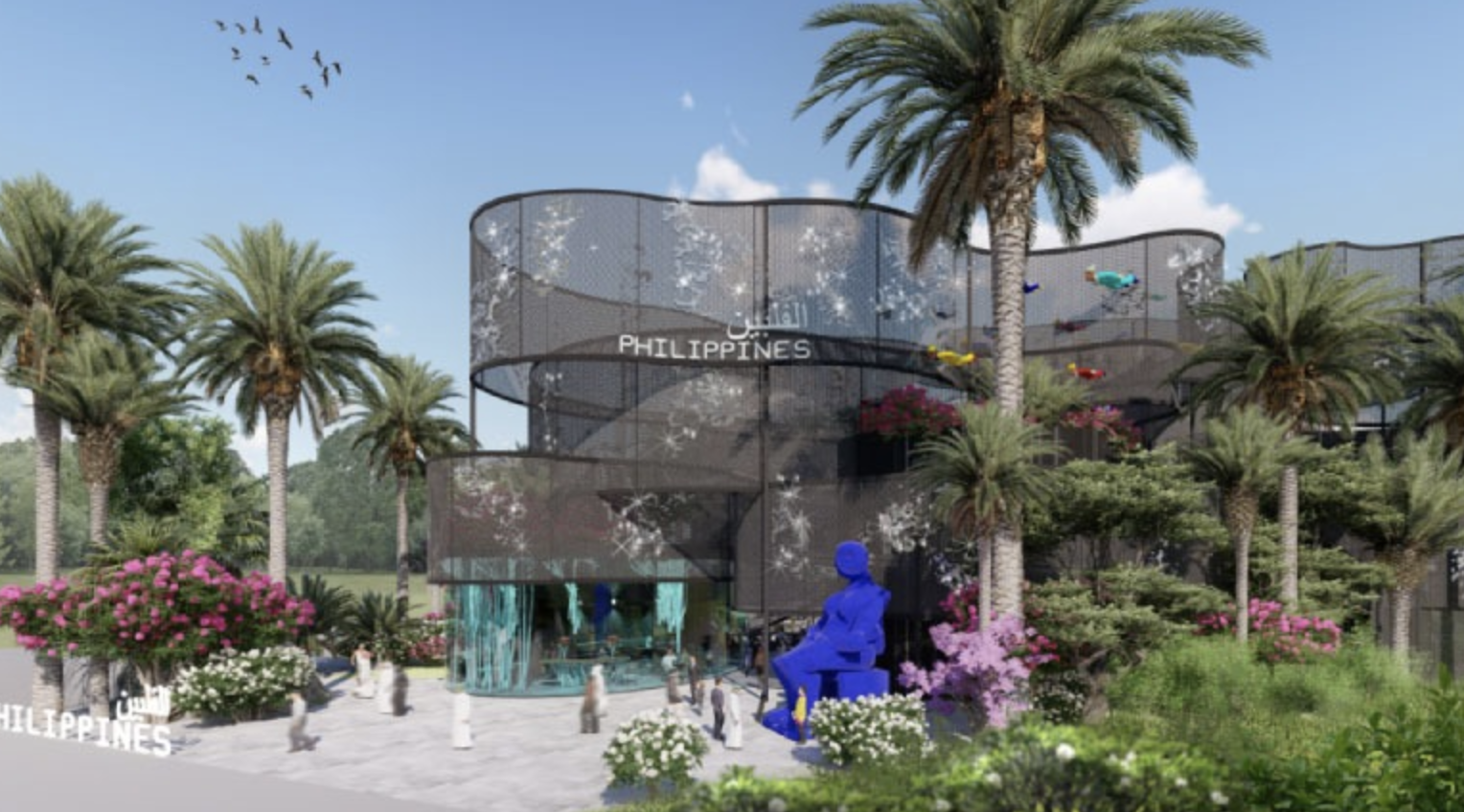 The Philippine pavilion at Expo 2020 Dubai is an ode to Filipino migrant workers across the world, represented through flying structures, bird-like motifs and stunning murals.

The ‘Bangkota’ (meaning coral reef)-inspired pavilion showcases the inter-connectivity and brotherhood among Filipino workers, or ‘Kabayan.’

Curator Marian Pastor Roces has made use of the creative genius of acclaimed Filipino artists throughout the exhibition space to tell the Filipino story of cultural sustainability over the last 4,000 years.

A sculpture titled ‘Flying overseas workers’ by Charlie Co, a contemporary Filipino artist, depicts floating men and women representing ‘expatriate Filipino workers flying – to everywhere, for everything, in every possible way forward. And back to The Philippines.’

The theme of travel is not only about today’s Filipino migrant workers, but also about their ancestors who spread from island to island, continent to continent, to settle on all islands of half the planet during the Neolithic period.

The mural by painter Dex Fernandez depicting the Filipino diaspora, will also strike a chord among thousands of Filipino expats in the UAE (there are an estimated 2.3 million Filipinos overseas, of which more than 650,000 are in the UAE).

The pivotal spaces in the pavilion are also marked by the presence of a two-storey high sculpture of a mythological figure by Duddley Diaz — a techno-mythological suspended piece by Dan Raralio; human-bird forms by Riel Jaramillo Hilario; and an explosion of bird forms by Toym Imao.

“These evoke the images of Filipino contract workers moving all around the world. They play an important role, and we want to celebrate our overseas workers,” said Marian Pastor Roces, pavilion curator.

“The bird motif is a common theme you will see throughout. It depicts the first arrivals of the people 4,000 years ago who speak our languages,” she said.

Notable Filipino artist Ramon P. Santos, Laureate of the Order of National Artist for Music, has composed musical notes that add to the visitor experience.

Artist Lee Paje has conceptualised sculptural work that dance with the wildlife photography of Scott “Gutsy” Tuazon and Ivan Sarenas. The three-dimensional filigree boat by artist Patrick Cabral and the tall helix rising to the top by Baby and Coco Anne, etched with names of Filipinos of different cultures, and sharing the same DNA markers that have mixed through 65,000 years, are other notable sculptures that add to the artistic ambience of the pavilion. In another room, Pastor Roces has also specially commissioned a video entitled, ‘Our Gift to the World’, the Philippines’ call to end racial divisions. The video centres on contemporary dance that poetically gathers motifs of Filipino life, and is choreographed by Denisa Reyes and Japhet Mari “JM” Cabling, to music by young composer Teresa Barroso.

Pastor Roces said the pavilion exhibit is an amalgamation of architecture, design, art and music into a single narrative that tracks the history, culture and language of The Philippines, while reimagining it through a contemporary prism.

“It is special as the content of the pavilion is entirely developed by artists. The art was developed in relation to the spaces conceived by architecture. It is not a museum. It is not a contemporary art gallery. They chose artists who had already developed enough artistic vocabulary, but were willing to take a back-seat as individual artists, and help drive the single narrative for the pavilion,” Roces told Khaleej Times.

The design of the ‘Bangkota’ pavilion, or ‘coral reef’ in ancient Tagalog, honours the natural resources that the Philippines has to offer, specifically the architectural character of the coral reefs native to the archipelago.

Chief architect Royal Pineda of Budji+Royal Architecture+Design, says he wanted to showcase The Philippines as honestly and authentically as possible.

“With sustainability at the core, we thought of presenting the nature of The Philippines that we organically own, and defines us as a country. We chose coral reefs as The Philippines is the centre of biodiversity of the world. ‘Bangkota’ presents something that is very progressive, and yet very much rooted in what we are and who we are,” said the award-winning architect.

While aligning with the Expo 2020 theme of ‘Connecting Minds and Creating the Future’, the pavilion also reinforces the message that man is nature and that is where he belongs, said Pineda.