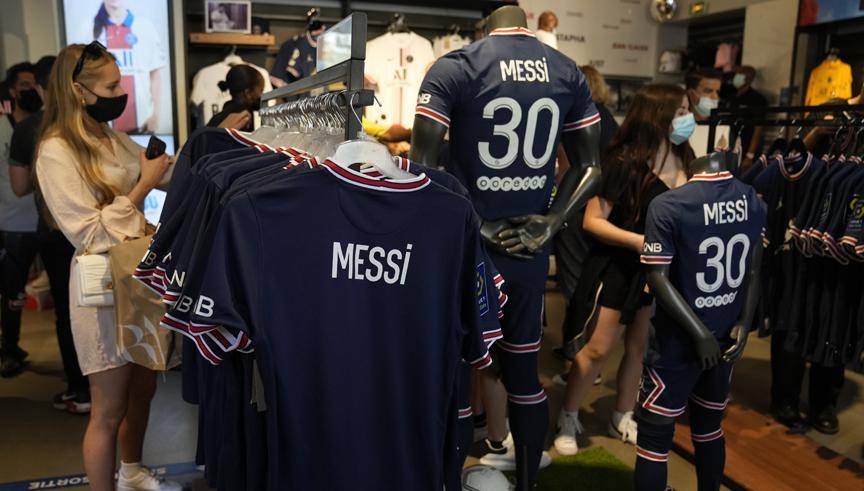 According to activity tracker Talkwalker, PSG gained 3 million followers, including 2.1 million on Instagram and 611,000 thousand on Facebook

Replica shirts bearing his name are flying off the shelves, followers are flocking by the million to his new club’s social media accounts and TV rights suddenly look a bargain: Lionel Messi’s arrival in Paris has set the money train in motion.

Paris Saint-Germain chairman Nasser Al Khelaifi told reporters on Wednesday that people would be “shocked” by the revenue the 34-year-old six-time Ballon d’Or soccer world player of the year would bring to the club he joined as a free agent the previous day.

In PSG’s flagship shop in central Paris, one fan who queued two hours to buy a Messi shirt as soon as the Argentine signed, was more than happy to part with the 165 euros ($194) his purchase cost him.

“I just had to come and buy it,” 18-year-old Jonathan Bouyer Msied said, beaming. “It will bring PSG a lot of money, and it will bring fans a lot of fun and joy. There’s something in it for everyone, and everybody will be happy.”

Amazon, which in June won the rights to broadcast 80% of the top French division’s matches at a fraction of the original price after partner Mediapro pulled out, is certainly among the winners, said sports marketing expert Vincent Chaudel.

“Amazon… already got its early Christmas present in June and now just won the lottery. Broadcasting so many matches for so little money, with (Messi) on top of that … it’s all a big win,” said Chaudel.

“The second winner is PSG, which will consolidate its spot among the world’s biggest clubs.”

Chaudel expected, however, that the actual financial impact, for which the club have not given estimates, would be less than when Brazilian forward Neymar joined the deep-pocketed PSG — like Messi from Catalan giants FC Barcelona – in 2017.

“That’s simply because Neymar arrived just before sponsorship and shirt deals were renegotiated,” whereas they are now locked in until 2032, he said.

Amazon and Nike, which has a kit deal with PSG, did not immediately return requests for comment, and PSG have been similarly silent on Messi’s salary package.

On social media, however, the numbers became visible as soon as rumours of a possible transfer to PSG started.

According to activity tracker Talkwalker, from Friday evening to Tuesday evening, PSG gained 3 million followers, including 2.1 million on Instagram and 611,000 thousand on Facebook. An estimate by Front Office Sports showed a 4.5 million increase on Instagram alone over the past 24 hours.

For some back in the club shop, the shift of allegiance was already taking place.

“I’m a big Barcelona fan, a Messi fan, I’ll follow him anywhere he goes,” 18-year-old Adiel Ramirez said. Not previously a particular fan of PSG, “I will definitely root for them now that Messi is here,” he added.