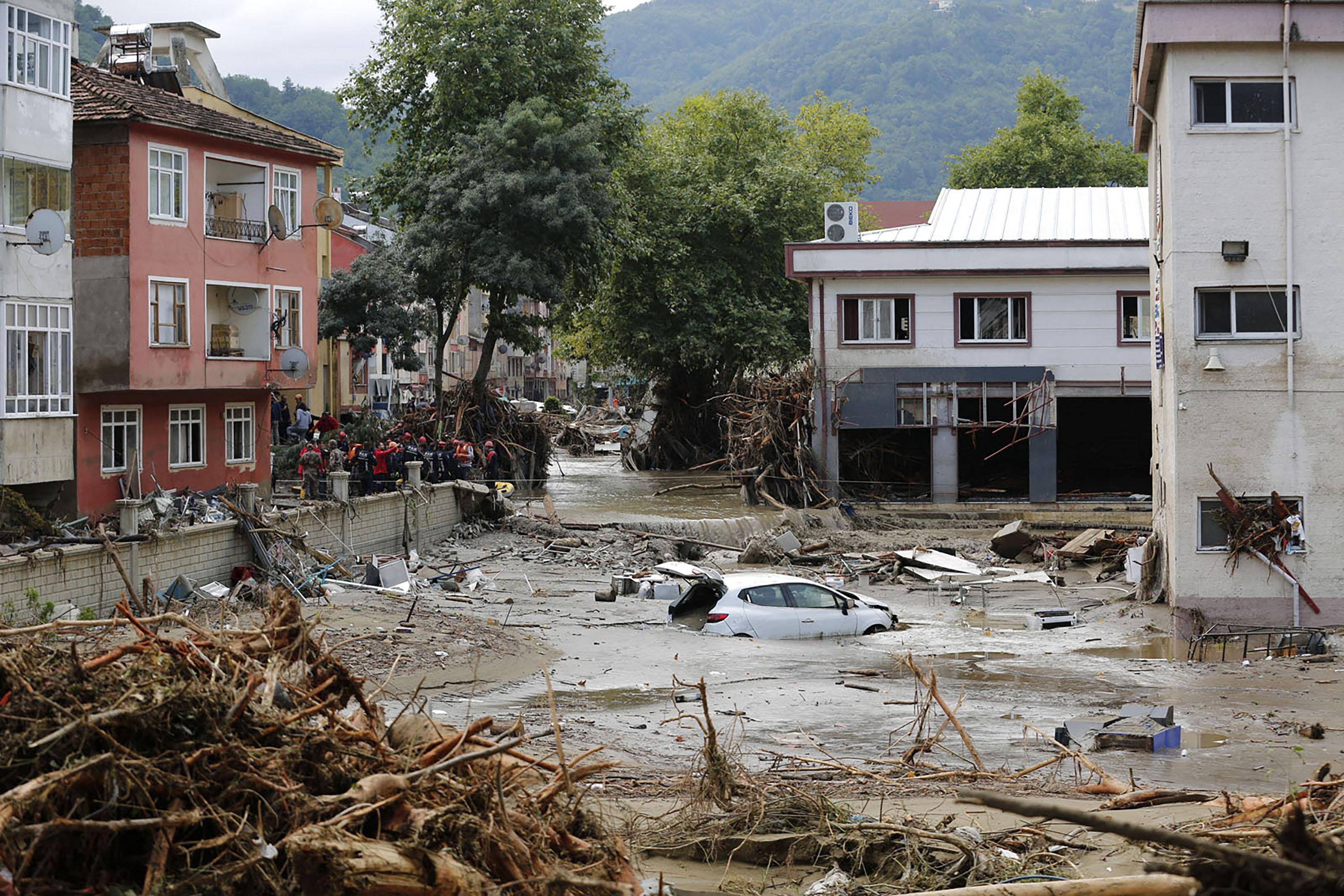 Turkish rescuers distributed food and relocated thousands of people into student dormitories Thursday as the death toll from flash floods that swept across several Black Sea regions rose to 11.

The torrential rains descended on Turkey’s northern stretches just as rescuers reported bringing hundreds of wildfires that have killed eight people since late July under near total control in the south.

Turkey has been grappling with drought and reeling from a rapid succession of natural disasters that world scientists believe are becoming more frequent and intense because of climate change.

Storms that swept in from the Balkans late Tuesday turned streets into running rivers and set off mudslides that buckled roads and tore down bridges in three mountainous regions hugging Turkey’s rugged Black Sea coast.

Emergency services said waters briefly rose in some parts as high as four metres (13 feet) before subsiding and spreading across a region stretching more than 150 miles (240 kilometres) wide.

Agriculture and Forestry Minister Bekir Pakdemirli warned on Wednesday that the area was facing “a disaster that we had not seen in 50 or 100 years”.

Rescuers were forced to evacuate a hospital holding 45 patients — four of them in intensive care — in the region around the coastal city of Sinop on Wednesday.

Images on television and social media showed stranded villagers being plucked off rooftops by helicopter and bridges collapsing under the force of the rushing water below.

Turkey’s disaster response authority said 10 people had lost their lives in the northern Kastamonu province and one in the neighbouring region of Sinop.

Rescuers were also searching for a person who disappeared in the northern city of Bartin.

President Recep Tayyip Erdogan’s office said he held a phone call with the heads of the affected regions Thursday and promised to provide all state assistance available.

The emergencies authority said more than 1,000 rescuers were working in the region while Turkish Red Crescent teams were distributing food packages and hot meals.

Officials said more than 5,000 places had been allocated in student dormitories to shelter those displaced by the floods.

The Anadolu state news agency said rescuers were focusing on a four-floor apartment building that partially crumbled and another one next to it that completely collapsed.

Images showed parts of both river-front buildings toppling into the rushing flood of brown water below.

Weather services predicted rains to continue to lash the affected area for the remainder of week.

The disaster struck less than a month after six people died in floods caused by heavy rains in the northeast Rize province.

Officials said that all but three of the nearly 300 fires that had been ravaging Turkey’s Mediterranean and Aegean coasts since July 28 have been brought under control.