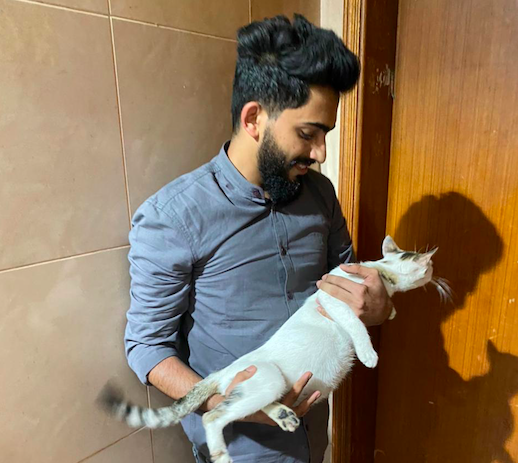 The expat, who posted the video via his Instagram handle is a huge fan of Sheikh Mohammed.

A resident has described his “shocking surprise” after the Dubai Ruler shared a video he had shot of three quick-thinking workers saving a pregnant cat’s life.

Proud and happy to see such acts of kindness in our beautiful city.
Whoever identifies these unsung heroes, please help us thank them. pic.twitter.com/SvSBmM7Oxe

His Highness Sheikh Mohammed bin Rashid Al Maktoum, Vice-President and Prime Minister of the UAE and Ruler of Dubai, had shared the video on Tuesday, calling the workers “unsung heroes”.

“Proud and happy to see such acts of kindness in our beautiful city. Whoever identifies these unsung heroes, please help us thank them,” Sheikh Mohammed had said in a tweet.

Reacting to the royal recognition, the Indian expat, who is also surprisingly named Mohammed Rashid, told Khaleej Times he never expected such an honour.

The expat, who posted the video via his Instagram handle Rashid_bin_Mohd, is a huge fan of Sheikh Mohammed.

The Malayalee said the incident happened in Deira’s Freej Murar. Rashid’s father has been running a grocery in the area for the last 35 years. The cat was a familiar sight to workers in the area, Rashid said.

“We are not sure how the cat managed to sneak into balcony. As she was dangling from the balcony, two cleaners of the building and another worker took position below it. They held out a bedsheet as a net and the cat jumped into it,” the Kozhikkode native said.

The cat is perfectly alright, he added. “She is very friendly and often comes to our grocery, where we feed her milk.”

Rashid said he never expected Sheikh Mohammed to tweet the video. “I was not aware that he had. It was only after my friends called me that I got to know. I was shocked, surprised and happy.”