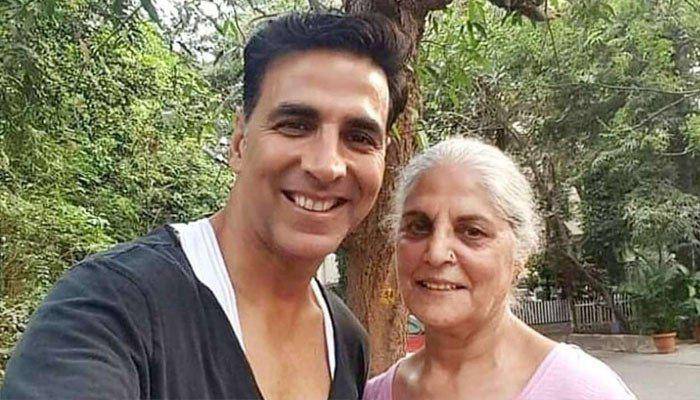 The actor took to social media to share the painful news on Wednesday morning.

Bollywood star Akshay Kumar’s mother has passed away after illness.

The actor took to social media on Wednesday morning to pay tribute to her mother, Aruna Bhatia, as he shared the painful news of her passing away.

Kumar wrote: “She was my core. And today I feel an unbearable pain at the very core of my existence. My maa Smt Aruna Bhatia peacefully left this world today morning and got reunited with my dad in the other world. I respect your prayers as I and my family go through this period. Om Shanti”.

Earlier this week, he had rushed back to Mumbai on Monday from the UK, where he was busy shooting for his film ‘Mission Cinderella’, to be by his mother’s side at an ICU in a city hospital.

His mother had been unwell and hospitalised.

Akshay is known to be extremely close to his mother, and despite his busy shooting schedules he has always taken a break to be by her side. “Even in this day and age, you’re the only one whose one hand on my head can comfort me in troubled times because I know there’s nothing I can’t do with your blessings maa. Happy #MothersDay,” Akshay had mentioned on Mother’s Day.

Last year, on her 80th birthday, Akshay took her to Singapore and spent a week there and also at the Marina Bay Sands casino, her favourite place. “Do more of what you love doing and that’s exactly what the birthday girl did. Spent the past week in Singapore taking mom to her favorite place in the whole world: the casino,” Akshay had posted on Facebook.

While the superstar rushed back to Mumbai, he told his team to go ahead with the shooting of scenes where his presence is not needed. ‘Mission Cinderella’ is a remake of ‘Rakshasudu’, a 2019 Telugu thriller, being produced by Vashu Bhagnani and directed by Ranjit M Tewari.