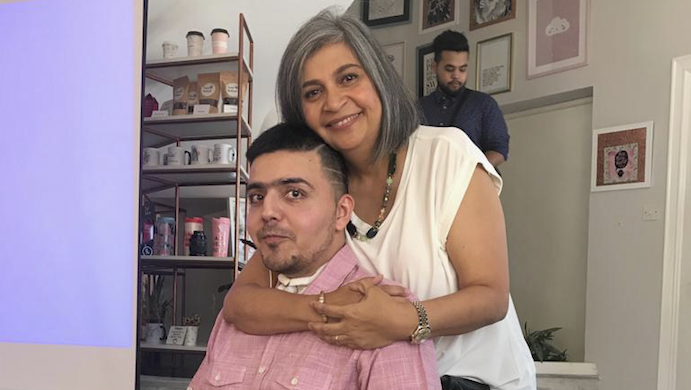 A wheelchair-bound young artist who uses remote-controlled cars, sticks, spoons to paint, and a hearing-impaired painter have become the first set of people of determination to be granted the UAE’s coveted Golden Visa.

Dubai residents Sharan Anil Budhrani and Victor Sitali, and their teacher and art mentor Gulshan Kavarana, were granted the ten-year visa by the Dubai Culture and Arts Authority under the creative arts category for their outstanding contribution in the field of art.

The three were nominated by Nasser Juma Bin Sulaiman, manager of the Al Fahidi Historical Neighbourhood.

Wheelchair-bound Budhrani, 30, received his Golden Visa while he was on ventilator support battling a recent bout of pneumonia.

An inspirational artist and motivational speaker, Budhrani was diagnosed with muscular dystrophy (a muscle-weakening degenerative disease) when he was nine and has been in a wheelchair since the age of 17.

Refusing to let circumstances kill his spirit, Budhrani decided to pursue his passion in painting and became an artist and a motivational speaker.

Budhrani was mentored by Kavarana and joined Mawaheb art studio in 2011, where he honed his skills.

“After joining Mawaheb studio, I discovered the artist in me. I got a lot of opportunities to display my artworks and took part in several exhibitions and also received recognition for my work,” he told Khaleej Times.

In 2016, Sharan started using remote-controlled toy cars to paint since it was difficult to paint on large canvases because of limited mobility in his arms. He also uses sticks, spoons, rollers, ropes to splash, drip and pour paint on the canvas.

“When I do the demonstrations, it brings people together. Children show a lot of interest and enthusiasm to get involved with remote-controlled cars. I have done live demonstrations in a few places. One of my finished pieces are hanging on the walls of Dubai Airport offices,” he said.

An excited Budhrani, who is recovering from a bout of severe pneumonia and is on partial ventilator support, told Khaleej Times: “I’m now recognised as an artist in the creative arts category. It is a new beginning and it shows me there is hope ahead, despite the recent challenges. I’m very happy I got it and very thankful to the authorities.”

“Dubai is very much accessible for moving around in my electric wheelchair and has made life so much easier. I’m happy to be living in the UAE and to be a person of determination recognised as an artist without boundaries.”

Zambian national Sitali has been hearing-impaired since the age of three but found a way to express his feelings through painting a few years ago when he landed in the UAE.

Sitali attended an art studio in Dubai that has now shut down, Mawaheb from Beautiful People, from 2011 to 2014. He was mentored first by Kavarana and later by Trevor Waugh, an artist from the UK in 2012.

Sitali is a figurative painter who primarily works with oil paints and acrylics on canvas, in addition to watercolours, pastels, and charcoal on paper. His portraits of African faces, birds, eyes, and landscapes relay an authentic African folklore in an eye-catching fashion.

In 2017, he graduated from the SAE Institute in Dubai with a degree in graphic design. Today, the 31-year-old is an established artist who expresses rich world experiences through his artwork and spends his time working on art pieces at an art studio in the Tashkeel villa in the Al Fahidi Historical Neighbourhood. His paintings hang in prestigious homes and at 5-star hotels where you can see portraits of the rulers of UAE.

Sitali was titled the ‘Best Artist’ at the First Annual Ras al Khaimah Fine Arts Festival and received an honourable mention among 1,700 artists worldwide for the International Emerging Artists Award in March 2013. Currently, he has been listed under the 10 Emirates-based artists to follow.

Sitali considers art to be a voyage with no destination and indulges in the rich expedition without turning back.

Overwhelmed at the honour conferred on them by the authorities, Kavarana said: “I have been Victor and Sharan’s teacher for the last 10 years and I am super happy to now see them both as independent solo artists. To get the Golden visa alongside my students is the biggest honour for me. And the best part of this honour is that the UAE has recognised them as artists not people of determination artists.”