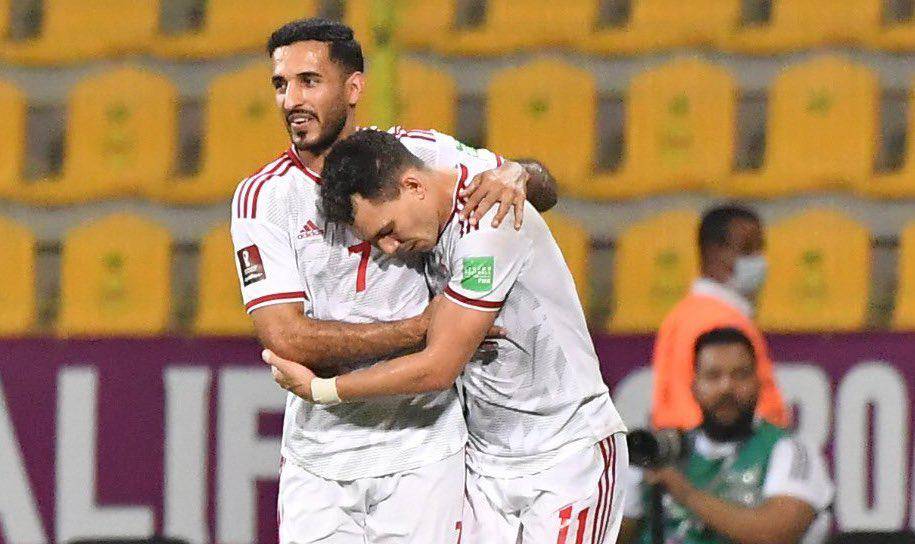 Ali Mabkhout scored in stoppage time as the UAE fought hard to pull off a draw against Iraq in a crucial World Cup Qualifier in Dubai on Tuesday.

The Al Jazira marksman’s effort from close range nestled into the bottom left corner of the net following the assist from Waleed Abbas in the 93rd minute. The Whites and Iraq remained winless following the 2-2 stalemate at the Zabeel Stadium.

Caio Canedo fired the hosts ahead midway through the first half, but a Mohamad Al Attas’ own goal 16 minutes from time gave the visitors a foothold, and substitute Aymen Hussein sparked mass celebration among the Iraqis when he put them ahead in the 90th minute, only for Ali Mabkhout to snatch an equaliser in the fourth minute of added time.

It was a thrilling encounter, but the result does little to help either side’s hopes of direct qualification for Fifa World Cup Qatar 2022, with both UAE and Iraq sitting seven points behind group leaders Iran, and five adrift of second placed Korea Republic.

It may have been only the fourth of 10 matchdays in the final round, but the nature of the group standings made it a game of significant importance for both sides, and it was the hosts who enjoyed the brighter start.

Abdullah Ramadan and Fabio Lima both got in behind the Iraqi defence in separate early attacks, but neither managed to get a shot away, an affliction which also affected Iraq’s Alaa Abdul Zarah, who was thwarted by rushing UAE goalkeeper Ali Khaseif after Beshar Resan unlocked their backline in the 33rd minute.

Less than a minute later the Emiratis were ahead, with Caio Canedo stealing in behind the hesitant Ali Faez before slamming the ball beyond Fahad Talib from close range with the UAE’s first shot on target.

Iraq remained very much in the game, but their struggles in front of goal in these AFC Asian Qualifiers continued, with none of their eight first half shots directed on target as Bert van Marwijk’s men took their lead to the interval.

The usually clinical Mabkhout squandered a golden chance to double the hosts’ advantage when his tame effort was easily saved by Talib with 20 minutes remaining, and that moment took on greater significance when Iraq equalised in unlikely fashion four minutes later.

Rarely able to test their opponents defence prior, the visitors conjured their leveller via the head of UAE defender Mohamad Al Attas, who unwittingly directed Amir Al Ammar’s hopeful cross just out of the reach of Khaseif to give Dick Advocaat’s side a crucial lifeline with 16 minutes remaining.

Iraq then looked to have claimed all three points in the 90th minute, when substitute Aymen Huseein benefitted from a superb dummy from Al Ammari to complete the comeback and give Advocaat’s side an implausible lead.

But the drama was far from over.

Mabkhout shrugged off his indifferent night in front of goal to dramatically draw UAE level in the fourth minute of injury time, poking home from close range as confusion reigned in the Iraqi defence, and it took a last gasp save from Talib to prevent Khalfan Mubarak from snatching a winner, with only a final VAR decision confirming the final 2-2 result.