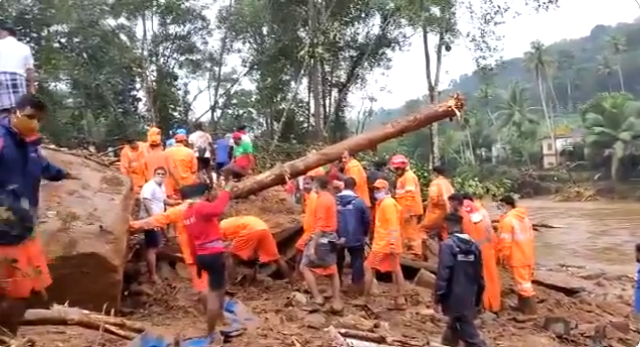 Thirty-three people, including eight women and seven children, have been rescued so far

Eleven people have died and at least 20 were reported missing as heavy rains continued to lash Kerala on Sunday.

Over the last 24 hours, the state has witnessed extremely heavy rainfall and landslides due to which has claimed the lives of as many as nine people so far.

Two more bodies recovered from the site of landslide at Koottikkal in Kottayam district taking the death toll in the state to 11, according to the State’s Information and Public Relations Department.

State ministers K Rajan, Roshy Augustine and VN Vasavan took part in a review meeting to assess the situation arising in the state at Mundakkayam, Kottayam.

A total of 11 teams of the National Disaster Relief Teams (NDRF) have been deployed to the state in coordination with the Kerala State Disaster Management Authority (KSDMA).

Thirty-three people, including eight women and seven children, have been rescued so far, according to the NDRF.

The National Disaster Response Force conducted a rescue operation in Kokkayar, Idukki after the rains triggered a landslide on Saturday.

“A trough lies over southeast near East Central Arabian sea which could bring isolated heavy rainfall in some parts of Kerala in next 24 hours and it will subside further,” the department reportedly said.