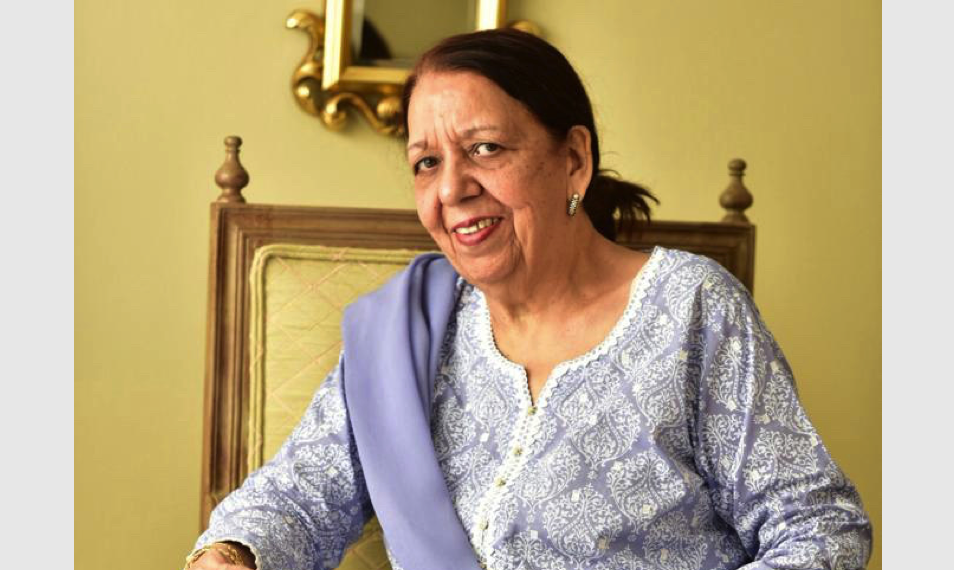 When Pakistani expat Neelofer Fatima Ghiasuddin landed in Dubai in 1979 to meet her siblings, little did she know that she would be one day spend more time in the UAE than her own!

Neelofer, now 71, says she stayed on and made it her home as the UAE gave her recognition, respect and space to realise her full potential.

The expat who began driving at the tender age of 15 in her hometown Lahore, Pakistan — out of a passion for driving – was given the opportunity to join one of the most prestigious government entities – Dubai Police. As fate would have it, she became the first and only Dubai Police woman driving examiner from the whole of Southeast Asia in 1981.

“I came to the UAE in 1979 to visit my brother and sister who lived in different emirates. And although I had a good life in Lahore Pakistan, where I lived with my parents, I had this urge to see the world so I requested my siblings to call me. There was something about this country that made me want to stay a bit longer… Before I realised it, I ended up spending a good 35 years of my life here. In fact, the best 35 years of my life,” Neelofer told Khaleej Times.

“I stayed in Sharjah with my sister first and spent a year looking for jobs, before finally getting one as a school teacher in Ajman. I worked there for six months and a friend there told me that Dubai Modern Driving school on Al Wasl Road was looking for women instructors. I was interested as I had been driving since the age of 15 and in those days there were hardly any women who could drive. ince I was residing in Sharjah, I took a driving licence of Sharjah (first attempt) and applied at the Dubai Modern Driving school which was the only driving school in Dubai, and it was a Dubai Police entity,” she said.

Neelofer was appointed as a driving instructor at Dubai Police, along with some 30 other women, mostly British.

“I served as a driving instructor at Dubai Police and then after five years was promoted as an examiner, who takes the final test and has the authority to award a driving license. In those days the driving license was given by only one school – Dubai Modern Driving school in Al Wasl Road,” she said.

Not only did Neelofer excel in her work, first as an instructor, and later as an examiner, but she trained hundreds of people who went on to become excellent drivers, with low accident records.

“I was taught the methodology of driving by one of the top British trainers, who came especially to train us from the UK. And I knew that more than power, my role carried high responsibility that involved the lives of people. This is why I was a strict examiner, who was known for her sincerity, perfection and fairness. The number of students I would pass would be very less as I wanted them to be near-perfect when they took to the roads as drivers,” she said.

How she learnt driving

Since Neelofer’s father was a doctor in the army, she had the privilege of a car at her disposal in Lahore in the 1960s, when owning a car was considered a luxury.

“We were lucky as we had many drivers who would drive my father around, and since I was fascinated with driving, I would often request them to teach me the basics. This was a time when there were no laws regarding driving – there were hardly any cars! I was just 14 or 15 when I learnt driving, and would drive my family around Pakistan. People would be shocked to see me, a young girl, drive in those times, but I was lucky my parents were very supportive and my father would feel so proud of me,” she said.

After Neelofer’s sister moved out of the UAE, she continued staying with her niece and her husband and kids.

Her niece Amna Adnan, who has spent most of her time with Neelofer, said: “ I have grown up seeing my aunt Neelofer, who first took care of us as kids and is now taking care of my kids. We used to feel so proud of the fact that our aunt was one of those few women who would drive in Lahore in the 1970s, and then made us proud here in the UAE by dedicating her life to the Dubai Police, where she was known as one of the best lady examiners.”

Talking about how fair and strict her aunt was in her job, Aamna said: “I was failed by my aunt just for making one mistake. I was quite upset about it, but ‘Neelo’ aunty explained that it was for my benefit, and said that if my mistakes were not corrected, it would be harmful for me. In fact this was her unique quality as an examiner that while others would simply hand over the paper to the student saying her or she had failed, Neelofer aunty would sit with the student and explain the mistakes he or she made, so they didn’t repeat the same. At times, she would also call the student’s instructor and guide him/her on how to train the student for better results.”

Neelofer explained that though she loved her job, at times she would be stressed when she examining a dignitary or member of the Royal family.

“However the best part about working for Dubai Police was that they never put pressure on me to pass anyone – be it a dignitary or a Royal. The fairness of the system won my heart and made me want to stay here for longer. Everyone – rich or poor – is treated justly here as per their abilities. My bosses trusted me and my judgment immensely and gave me a free hand to judge who is a good driver and who deserves the licence. There was never any prejudice or privilege given to even the families of Royals or dignitaries when it came to getting their driving license. No one ever called us to say if any VIP has to be given a special treatment.”

In the last five years of her service at Dubai Police, Neelofer was moved to the radar fines’ section, where she served till 2016. She has retired since and had been living with her niece and her family in Dubai, before moving back to Pakistan as her niece and family are moving to the UK. She will soon be moving to the UK to live with them once their visas are processed, she said.

“Neelo aunty is the pride and integral part of our family. And she will always remain with us wherever we go,” said Amna.