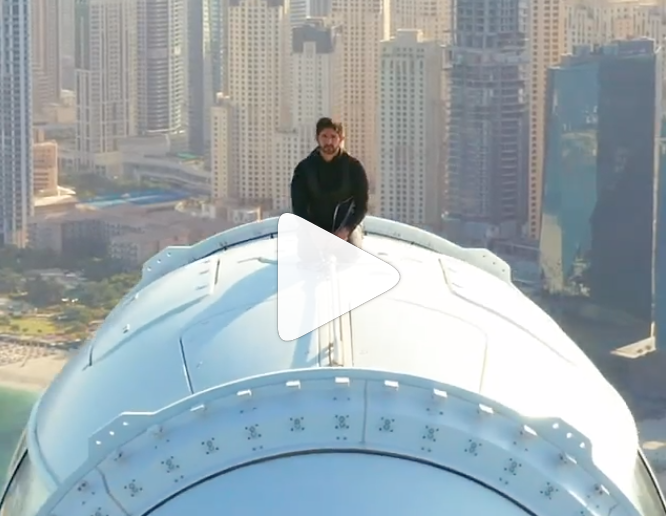 Dubai’s beloved Crown Prince is at it again: outdoing himself in the uber-cool department, that is.

Sheikh Hamdan bin Mohammed bin Rashid Al Maktoum took to social media on Thursday to share a daring video in which he can be seen at the highest point of the world’s largest and tallest observation wheel.

The city’s latest attraction opened to members of the public today, October 21, and this latest shoot by Sheikh Hamdan — well known for being an adventure-loving enthusiast himself — is only fuelling the fervour.

The clip opens with a shot of him sipping from a mug embossed with the Fazaa logo, before the camera pans out to reveal his perch: right atop a cabin at the highest point of the wheel.

A harness is all that keeps the Crown Prince tethered to safety as the camera continues to dip and dive in dizzying ways, giving viewers a feel for the sheer height of the Ferris wheel — all 820 feet of it! Take a look:

Earlier this week, Sheikh Hamdan had teased his sizeable social media following with a photo of himself with two others, who were flashing victory signs, and a simple caption that said: “A harness and a blue sky?”

Tickets to the attraction cost Dh130 for adults and Dh100 for children aged three to 12 years.

Residents and visitors have been promised plenty of thrills this weekend, with live entertainment, food trucks and, of course, spectacular views.

>> Photos: Why Ain Dubai, world’s tallest observation wheel, is a must-visit this October