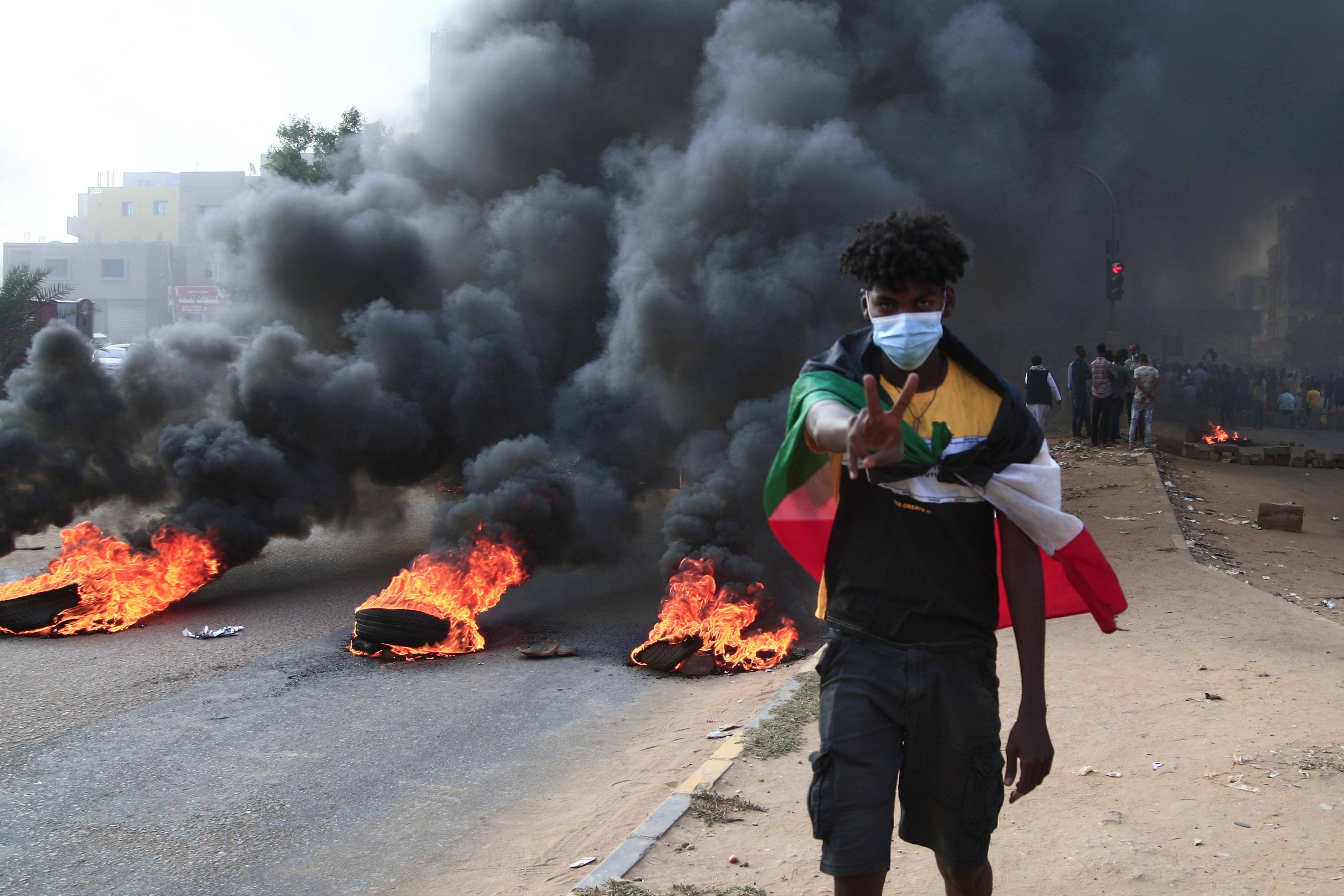 Gen. Abdel-Fattah Burhan announced that he was dissolving the country’s ruling Sovereign Council

Sudan’s leading general declared a state of emergency Monday, hours after his forces arrested the acting prime minister and disrupted the internet in an apparent coup as the country was nearing a planned transition to a civilian leadership.

In a televised address, Gen. Abdel-Fattah Burhan announced that he was dissolving the country’s ruling Sovereign Council, as well as the government led by Prime Minister Abdalla Hamdok. He said quarrels among political factions prompted the military to intervene and that a new technocrat government would lead the country to elections.

In response, thousands flooded the streets of the capital, Khartoum, and its twin city of Omdurman to protest the apparent military takeover. Footage shared online appeared to show protesters blocking streets and setting fire to tires as security forces used tear gas to disperse them.

Protesters could be heard chanting, “The people are stronger, stronger” and “Retreat is not an option!” as plumes of smoke filled the air. Videos on social media showed large crowds crossing bridges over the Nile to the center of the capital.

At least 12 protesters were wounded in demonstrations, according to the Sudanese Doctors Committee, without giving details.

A takeover by the military would be a major setback for Sudan, which has grappled with a stop-and-go transition to democracy since long-time autocrat Omar al-Bashir was toppled by mass protests two years ago.

The moves come less than a month before Burhan was expected to hand the leadership of the ruling transitional council to a civilian. The Sovereign Council, which has run the country since shortly after al-Bashir’s ouster, includes both military and civilian members, who have frequently disagreed over Sudan’s course and the pace of the transition to democracy.

US and European Union express concern

The United States and the European Union expressed concern over Monday’s developments.

Jeffrey Feltman, the U.S. special envoy to the Horn of Africa, said Washington was “deeply alarmed” by the reports. Feltman met with Sudanese officials over the weekend in an effort to resolve the growing dispute between civilian and military leaders. EU foreign affairs chief Joseph Borrell tweeted that he’s following events with the “utmost concern.”

The first reports about a possible military takeover began trickling out of Sudan before dawn Monday. By mid-morning, the Information Ministry confirmed that the prime minister, Abdalla Hamdok, had been arrested and taken to an undisclosed location. Several senior government figures were also detained, the ministry said in a Facebook post. It said their whereabouts were unknown.

Hamdok’s office said in a statement on Facebook that he and his wife were detained early Monday as part of what it described as a “complete coup.”

In other hallmarks of a takeover, internet access was widely disrupted and the country’s state news channel played patriotic traditional music. At one point, military forces stormed the offices of Sudan’s state-run television in Omdurman and detained a number of workers, the Information Ministry said.

Monday’s apparent takeover came after weeks of rising tensions between Sudan’s civilian and military leaders. A failed coup attempt in September fractured the country along old lines, pitting more conservative Islamists who want a military government against those who toppled al-Bashir in protests. In recent days, both camps have taken to the street in demonstrations.

After the September coup attempt, the generals lashed out at civilian members of the transitional power structure and called for the dissolution of Hamdok’s government. The Sovereign Council is the ultimate decision maker, though the Hamdok government is tasked with running Sudan’s day-to-day affairs.

Burhan, who leads the council, warned in televised comments last month that the military would hand over power only to a government elected by the Sudanese people. His comments suggested he might not stick to the previously agreed timetable, which called for the council to be led by a military figure for 21 months, followed by a civilian for the following 18 months. Under that plan, the handover was to take place sometime in November, with the new civilian leader to be chosen by an alliance of unions and political parties that led the uprising against al-Bashir.

Since al-Bashir was forced from power, Sudan had slowly emerged from years of international pariah status. The country was removed from the United States’ state supporter of terror list in 2020, opening the door for badly needed foreign loans and investment. But the country’s economy has struggled with the shock of a number economic reforms called for by international lending institutions.

Sudan has suffered other coups since it gained its independence from Britain and Egypt in 1956. Al-Bashir came to power in 1989 in one such takeover, which removed the country’s last elected government.

Among those detained Monday were five senior government figures, according to two officials who spoke on condition of anonymity because they were not authorized to share information with the media.

They include Industry Minister Ibrahim al-Sheikh, Information Minister Hamza Baloul, and Mohammed al-Fiky Suliman, a member of the Sovereign Council, as well as Faisal Mohammed Saleh, a media adviser to Hamdok. Ayman Khalid, governor of the state containing the capital, was also arrested, according to the official Facebook page of his office.

After news of the arrests spread, the country’s main pro-democracy group and two political parties issued appeals to the Sudanese to take to the streets.

One of the factions, the Communist Party called on workers to go on strike in an act of mass civil disobedience after what it described as a “full military coup” orchestrated by Burhan.

The African Union has called for the release of all Sudanese political leaders including Hamdok. “Dialogue and consensus is the only relevant path to save the country and its democratic transition,” said Moussa Faki, the head of the AU commission.